Why should god have all the best buns? 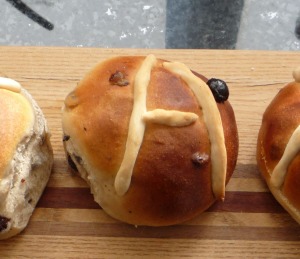 Hmm, hot cross buns. Or as us secularists like to call them; tea cakes. Here in the literary lad household we’re not religious, but we do rather like the Easter bunny, who died on Watership down to save us all, and was resurrected in the sure and certain hope that children everywhere (well, at least in the developed world) will always have lots of lovely chocolate to eat.  (I may have got a bit confused over some of the details; myths are not really my strong point). He may not have brought us a message of importance regarding the meaning of life (although, hang on a minute; chocolate…) but he has got a cute little cotton tail and soft, fluffy ears.

I’ve become increasingly uneasy about the symbolism of the cross on my buns in recent years. At the same time, however, I very much like hot cross buns. The solution came to me in a moment of inspiration: use a different symbol. There’s no law that says it has to be a cross. As you can see from the picture, I chose an ‘A’ for Atheist, as that represents my own personal belief system. But you could put whatever you like on them really. A crescent – if you’re a Muslim –  the initial letter of your name, CND logo, smiley face, Bauhaus face; the choice is limited only by your own imagination. I can see a new tradition taking off, where every Easter people compete to create the bun with the most original symbol.

I don’t see why we shouldn’t take the best bits of religious tradition and change them to fit the modern, secular age. I’m sure there are lots of other traditions I could change. Maybe people could take part in Lent by giving up believing in god? Why not combine Diwali with Guy Fawkes to shine a light on corruption amongst MPs and give them a firework up their backsides at the same time? At Christmas, instead of celebrating the alleged birth of a character in Christian mythology, we could just buy each other lots of presents, eat far too much and get drunk. Oh no; that’s been done already…

Note:  Buns courtesy of Mrs Literarylad (and yes; they were very tasty thank you).

Graham Wright is a freelance writer and author. His first novel, Single Point Perspective, is set in and around the city of Manchester, where he lived and worked for more than fifteen years. His second, Moojara, is set in and around the world, but mostly centres on Perth, Western Australia. Both are works of dramatic literary fiction - imaginative, serious and thoughtful, but with a sense of humour. Graham is currently living in north Shropshire, where he is busy working on novel number three.
View all posts by literarylad →
This entry was posted in Religion and tagged Atheism, Secularism, tradition. Bookmark the permalink.