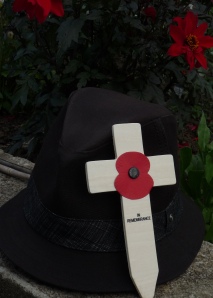 The British Legion sent me this cross. I like the British Legion. They’re a worthy charity, and they do valuable work, including providing social clubs for millions of people across the country (even if many of those clubs are in decline). It’s just; why did they have to send me a cross? They want me to write a message on it, send it back to them and they’ll include it in the field of remembrance at Cardiff castle. To commemorate those who fought, and in many cases died on our behalf. But what did they fight for, our selfless ancestors, friends, relatives? Surely it was freedom. Freedom from tyranny and oppression, freedom to enjoy basic human rights such as freedom of thought and freedom of speech. And freedom of belief. But the British Legion don’t seem to understand this. According to their leaflet they have other remembrance tribute options available, such as a crescent or a star. Presumably they have an option for those who aren’t religious. You have to phone them though, to find out about these, and to have them send you one specially. Because the British Legion made the decision to send a cross, a Christian cross, to everyone – a lazy assumption that we are all, by default, Christians, unless we speak up and tell them otherwise. For all they knew I could have been a Muslim or a Jew, or a member of the Church of the Flying Spaghetti Monster. As it happens, I’m an atheist.

After WW1, the Imperial War Graves Commission insisted on a standard, non-denominational headstone for war graves, in order to reflect the equality of death.(1) It seems that some people have learned nothing. The British Legion could have stuck with the inclusive image of the poppy for remembrance. But no doubt those that run the organisation are Christians, and saw no reason not to use a Christian symbol; no reason not to perpetuate the ongoing insidious, subliminal indoctrination that we encounter everywhere in our daily lives.

So the cross is still sitting there on my sideboard, a small insult, a symbol of religious oppression, yet another attempt to make me feel an outsider in my own land; a subtle suggestion of the establishment’s disapproval of my beliefs. As usual, I expect to mark the 11th November with my own personal thoughts, ignoring the religious ceremonies imposed on the nation by our government and the established churches. As for the cross, I’ll probably use it for kindling (as I don’t have any bibles left…)

Graham Wright is a freelance writer and author. His first novel, Single Point Perspective, is set in and around the city of Manchester, where he lived and worked for more than fifteen years. His second, Moojara, is set in and around the world, but mostly centres on Perth, Western Australia. Both are works of dramatic literary fiction - imaginative, serious and thoughtful, but with a sense of humour. Graham is currently living in north Shropshire, where he is busy working on novel number three.
View all posts by literarylad →
This entry was posted in Religion and tagged religion. Bookmark the permalink.