Is Roald Dahl destroying our language? 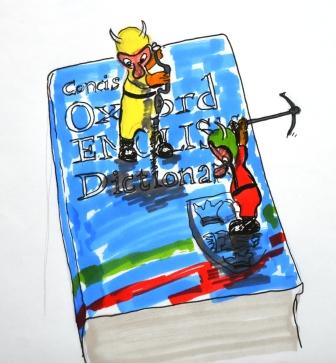 Gremlins are sabotaging  the English language!

The latest quarterly update to the Oxford English Dictionary includes made-up words and phrases used by Roald Dahl in his books.

Words like ‘scrumdiddlyumptious’ (which I think is just ‘scrumptious’ with a bit of nonsense filling in the middle, rather than a new way to describe an enjoyable game of rugby) and ‘oompa loompa’. It’s one of those curious co-incidences that at the same time as this was announced, I happened to be reading a book by Richard Dawkins which deals with, amongst other things, the evolution of language. Dawkins suggests that languages evolve in similar ways that living creatures do. Many writers have put made-up words into their books over the years, and I can imagine it must be very satisfying when one or more of your words or phrases find their way into general usage. There are many ways in which languages change, most of which, I think, are the result of people attempting to differentiate themselves from the rest of society. All of the commentary I’ve heard seems to be in the direction of suggesting that a changing language is a living language, and that’s a good thing. Whilst I can see the appeal, I can also see a huge problem.

To illustrate how the English language has changed, Dawkins used a passage by Geoffrey Chaucer, who was writing in the fourteenth century. Chaucer’s text is difficult to understand today. Some of the words have gone out of usage and are unknown to us. The grammar is odd, and the spelling so all over the place that we don’t even recognise some of the words that we know. Half a millennium of language evolution has seriously impeded Chaucer’s ability to communicate with us. With the current accelerated rate of change in language (I’m assuming the rate of change has accelerated, but I think this is likely given the fast pace of change in our society generally) how long will it take for what we are writing today to become gibberish? We understand the value of communication (or we think we do) but we don’t seem to have the foresight to consider the benefit of being able to communicate outside of the present. Do we want to be able to pass on our knowledge, our discoveries, our experiences, our mistakes, our feelings, and the sense of what it is like to live in todays society, to people in the future? In order to do this we would need to fix our language, to stop it from changing, or at least to hold back the rate of change. Then again, new words and ways of speaking often become popular for a while and then fade into obscurity, so perhaps the long-term effect of all this language change is less than it appears.

Isn’t it ironic that by creating new language, as well as adopting new ways of speaking into our writing, writers are effectively making the work of earlier writers obsolete, and that writers in the future will do the same to our work?

I love dictionaries. I can (and regularly do) get lost in them, but even people with much better memories than mine have no chance of remembering even half of the words in the OED. So, do we really need more words? Do we really need ‘scrumdiddlyumptious’, in addition to the more succinct ‘scrumptious’? And if we want to play around with words, aren’t we clever enough to do it ourselves? I’m inclined to be cynical and say that, for dictionary writers, it’s something of a gravy train [informal a situation in which someone can easily make a lot of money] *. Those guys are forever adding new words, but I wonder – do they ever take any out?

Graham Wright is a freelance writer and author. His first novel, Single Point Perspective, is set in and around the city of Manchester, where he lived and worked for more than fifteen years. His second, Moojara, is set in and around the world, but mostly centres on Perth, Western Australia. Both are works of dramatic literary fiction - imaginative, serious and thoughtful, but with a sense of humour. Graham is currently living in South Wales, where he is busy working on novel number three.
View all posts by literarylad →
This entry was posted in Writing and tagged Dictionary, Language, words, Writers, writing. Bookmark the permalink.