Books, books, everywhere, and barely a word to read…

I’m in Cadiz, in Andalucia, and there are a few interesting bookshops that have caught my eye. This one is named for the famous composer, Manuel De Falla, who was from Cadiz (and according to the plaque on the wall, was born in the house next door).

There’s no point in my buying any of the books, as I don’t know more than a few words of Spanish, so I couldn’t make a great deal of sense of any of them. Does the fact that I’ve coveted the books anyway make me shallow, or is it OK to appreciate books as beautiful items, rather than seeing them as vehicles for communicating ideas, information, stories?

This is our (myself and Mrs LiteraryLad) first visit to Spain, and the culture is very different from the UK. Everything closes up for the afternoon,  and opens again early evening. Late night shopping is the norm, and the restaurants don’t start to get busy until nine o’clock. We’re not used to eating so late. And we’ve maxed out on coffee, and drunk far too much red wine – the detox starts when we get home (to coincide with the caffeine cold-turkey).

We’ve had quite a cultural trip. The evening before last we went to a concert of Rodrigo’s ‘Concerto de Aranjuez’ – a standard in the brass band repertoire (if the film ‘Brassed Off’ is to be believed, it’s known as ‘Orange juice’ in the brass band community). We saw (and heard) the original version for guitar and orchestra – very impressive, and a magnificent performance.

We could have done with a bit more warmth, and a little less rain, but at least it’s better than at home, where we’ll be heading back soon. Time to hunker down for the winter I think. I’ll be needing some books then… 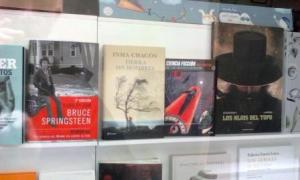 Graham Wright is a freelance writer and author. His first novel, Single Point Perspective, is set in and around the city of Manchester, where he lived and worked for more than fifteen years. His second, Moojara, is set in and around the world, but mostly centres on Perth, Western Australia. Both are works of dramatic literary fiction - imaginative, serious and thoughtful, but with a sense of humour. Graham is currently living in north Shropshire, where he is busy working on novel number three.
View all posts by literarylad →
This entry was posted in Writing and tagged Books. Bookmark the permalink.