I’ve been through all the stages of publishing my novel, and I’ve done almost everything myself, from editing, to typesetting, to designing a cover. If you haven’t been following, you can read how I did it here: An Idiot’s Guide to Self-Publishing. 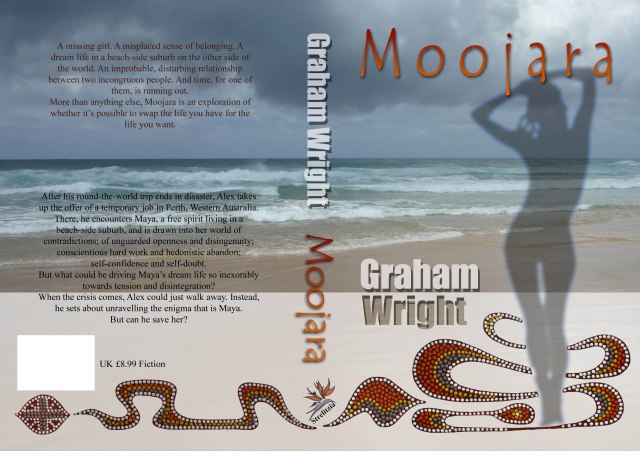 Actually, I did get some help with proof-reading and with editing, from friends and family. I called in the professionals for the actual printing of the books, which is the one thing it’s just not practical to do yourself. Up until now I think I’ve coped quite well. But I’ve hit a bit of a block when it comes to marketing.

It began well. I persuaded my two local bookshops, somewhat reluctantly, to take some copies. And their lack of enthusiasm melted away when I managed to get the local paper to run a story about the local author who set up his own publishing company Well, it’s technically true, even if the company so far exists only to sell my own books (that may change one day).  My article, complete with a photo of me printed frighteningly large, made page three (and I didn’t even have to take my top off). I sold a few copies off the back of that article. Unfortunately, I haven’t kept up the momentum. Two bookshops were never going to get me enough sales. So I made Moojara available by mail order, and also set it up as an ebook for sale on Amazon. But availability is not enough; people need to know it’s available, and that requires marketing.

It’s difficult. I’ve got a rough idea of what needs to be done, but it involves an awful lot of work of the kind I’m not really suited to, never having been a ‘people person’. I don’t like to impose on friends, because that’s not what friends are about (although the feedback I’ve had so far would suggest any unhappiness with being press ganged into buying a book would disappear when they started to read it[1.]) Although I don’t actually have many friends. To quote the Mark E. Smith song, I can count them on the fingers of one hand. Even my dog hates me. It’s OK, I’m only joking (I don’t have a dog).

I’ve given copies of the book to my local libraries (Penarth and Cardiff). I’ve tried independent bookshops further afield, in places like Brecon and Crickhowell, but they didn’t want to know. I haven’t even tried Waterstones, as I’ve read that self-published authors stand no chance with them (although perhaps I’m showing a lack of ambition – nothing ventured, nothing gained). Social media is, apparently, an essential tool for self-promotion, but to say I’m not great at social media would be an understatement. One of the most essential ingredients for social media success is time, and that’s something I don’t have much of.

It hasn’t helped that I’ve been distracted by an impending move from South Wales to the North West. We all know how stressful moving house is. I suppose I’ve sub-consciously made the decision to hold fire with the book promotion: it probably isn’t sensible to do a lot of work to promote my novel here, when I’ll soon be moving away. Perhaps my New Year’s resolution will be to take it up again with vigour once I’m settled in my new home. In the mean time, if anyone can offer some encouragement or advice, I’ll be very grateful. Only remember, this is very much a DIY affair – I don’t want to spend more money than I have done already…

Graham Wright is a freelance writer and author. His first novel, Single Point Perspective, is set in and around the city of Manchester, where he lived and worked for more than fifteen years. His second, Moojara, is set in and around the world, but mostly centres on Perth, Western Australia. Both are works of dramatic literary fiction - imaginative, serious and thoughtful, but with a sense of humour. Graham is currently living in north Shropshire, where he is busy working on novel number three.
View all posts by literarylad →
This entry was posted in Writing and tagged bookshop, editing, library, marketing, Moojara, novel, self-publishing, typesetting. Bookmark the permalink.

1 Response to Marketing Your Novel